B At Home: Tucker Lucas 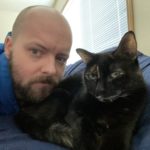 Hello Friends of Theatre B!

For this B At Home blog installment I was asked to write about my favorite hero from fiction.

When my friends and I first discovered Star Wars, they always wanted to play Han Solo or Darth Vader. I wanted to be Luke Skywalker. When we played Marvel Super Heroes, they would pick Hulk or Spider-man. I picked Captain America. When it was Ninja Turtles I was Leonardo. When it was Power Rangers I was Jason the Red Ranger. When it was Star Trek I was Captain Picard.

I’ve never lost those heroes of fiction, but it wasn’t until recently that I added to the roster. A couple of years ago I finally took the time to soak in David Lynch and Mark Frost’s groundbreaking television series Twin Peaks. If this game had continued into adulthood, I would want to be FBI Special Agent Dale Cooper.

I was never drawn to the cocky rogues, the anti-heroes or the brutes. I liked the leaders, the Boy Scouts, the guys who never ran their mouths. I liked characters who were both intrinsically good and unafraid to follow their instincts, regardless of what the group dynamic tended to reward.

I think I liked them so much because they were the opposite of me. As a kid, I was meek and overly sensitive, while they were strong and confident. When a bully got his hands on me I would shrink in fear, while they would stand their ground. When I became a teenager I was a sarcastic shit talker. I still am!

Dale Cooper is the best of them all. He is unequivocally positive, even in total darkness. He leads without meanness or condescension. He dresses sharp. He is curious, open-minded, and loyal. He is both an optimist and a realist, two labels that we typically treat as being mutually exclusive. When he speaks, you can see his luminous heart, which never bleeds. He is intellectually fair, emotionally robust, unapologetically square, and unflinchingly just.

Right now, we’re all stuck inside and apart, and it sucks. But we’re also surrounded by heroes. Doctors. Nurses. Grocery store clerks. Emergency personnel. Sanitation workers. Therapists. Volunteers. Builders. Teachers. Neighbors. Friends. My roster of heroes has exploded, and no fictional character will ever outshine their bravery.

This pandemic will eventually pass, and many of us will go back to the way things were before. Don’t do that. Life is too short and you’ll miss it when it’s gone. Love your family, love your life, and follow Coop’s words of advice.

“I’m going to let you in on a little secret: Every day, once a day, give yourself a present. Don’t plan it, don’t wait for it, just let it happen. It could be a new shirt in a men’s store, a catnap in your office chair, or two cups of good, hot, black coffee.”

When I finally grow up, I want to be FBI Special Agent Dale Cooper.