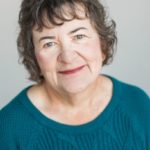 An Interview with Mary Cochran, Norma in The Last Schwartz

The Last Schwartz is an exploration of family dynamics; a 24-hour snapshot of four adult siblings gathering for the Jewish Yarzheit ceremony on the anniversary of their father’s death. The play explores the challenges that come with different ideas of what a family is or should be; the changes that come with the passing of the parents; the impact of faith on family dynamics and more.

Tell me about your character, Norma.

I play the character Norma, the oldest of the four siblings, the only daughter and the only sibling practicing Judaism. Norma would love for the family to be more intentional about gathering together and maintaining relationships. She faces many obstacles trying to get her brothers to see her way.

I think The Last Schwartz fits the repertoire of Theater B because it offers the audience the opportunity to see this family in a pretty raw state. The conversations can be direct and difficult. We see pieces of our families, the good and bad, on the stage. There are several topics in this play that will spark discussion when the performance is over.

If I had to choose a favorite line, I think it would be when Norma laments “Why aren’t we a real family?”. This is a profound struggle for her and informs many of the things she says and does.

My theatrical experience started in elementary school in the small town I grew up in western Nebraska. There was a woman in the community who produced and directed an operetta for several summers. That was my introduction to the joy of being on the stage and the bug just grew from there. I participated in musicals and one-acts in high school but that was essentially the end until I was well into adulthood and started doing community theater. I was part owner of a coffee shop/dinner theater in southern Minnesota for a few years prior to moving to the FM area in 2004. I had the great fortune of connecting with Theatre B not long after that and have been granted so many opportunities for growth in this world of theater as a result. My dream as a high school senior was to take The Great White Way by storm! A few things prevented that including the realization I wasn’t a good candidate to be a starving artist and I didn’t have the courage to go against my mother’s wishes that I graduate college with a degree that I could support myself with. Theater Arts was not on her list of approved majors!