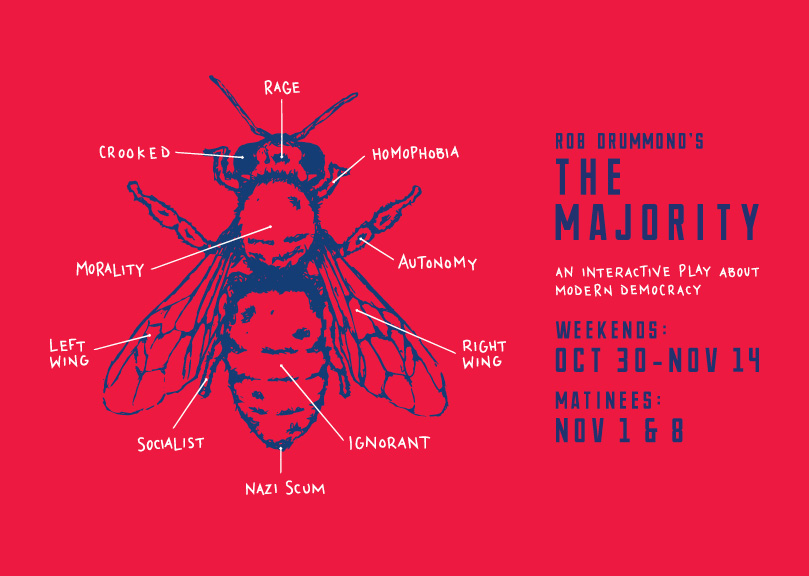 Thanks so much for such a brilliant production – I couldn’t be happier. ~ Rob Drummond

What kind of person tries to sell their vote? That’s the question that leads Robbi down the rabbit hole when Brexit doesn’t turn out at all as she expected. Why do some people vote and others don’t? How can a referendum be such a surprise? How do you continue to get along with your neighbors when half of them must be wrong?

The Majority by Rob Drummond is a smart and funny reflection on the imperatives and imperfections of democracy. The principles sound great, but they’re so messy in practice! What does it mean to be an informed and involved electorate? Why is the process so divisive? Which side is right? This one-person show doesn’t choose sides. In fact, audience members don’t just make up their own minds, they directly impact the story by practicing their civic duty – they vote!

Experience A Christmas Carol unlike any other—past, present or future. The timeless tale of Ebenezer Scrooge comes to thrilling new life as Tony Award® winner Jefferson Mays (I Am My Own Wife, Gentleman’s Guide…) plays over 50 roles in a virtuosic, master class of a performance that must be seen to be believed. This theatrical achievement comes from the haunting vision of one of Broadway’s most imaginative directors, Michael Arden (Tony-winning Best Revival – Once on this Island).

Staged exclusively for this production and captured live with breathtaking clarity, this must-watch streaming event conjures the powerful spirits of Christmas and brings all the magic of live theatre home for the holidays. Jefferson Mays said, “A Christmas Carol was my first experience of living theater. My mother and father would read it out loud every year. My father would tell the story with clarity and humanity, while my mother, eyes ablaze, would transform into the characters, from the tortured Jacob Marley, to little Fan and the entire Cratchit family. Both, in their ways, created magic. And now here we are, aspiring to bring this magic to people across the country during this challenging time.”

Michael Arden said, “My theater career began when I was a 10-year-old Texan playing Tiny Tim in the Midland Community Theatre production of A Christmas Carol. In a time when theaters and arts workers across the country are in great need, bringing a story that celebrates the power of creativity, community, and our shared humanity is humbling.”

Hunter Arnold said, “Due to COVID-19, the country’s theaters have lost over 80% of their income, a number that is devastating to our community. These theaters, the work they produce, and the artists and workers they support are a fundamental part of our society. We must fight for their survival.”

Theatre B is a partner through a joint project between Arnold’s TBD Pictures, La Jolla Playhouse, and On The Stage.

A Christmas Carol was filmed at New York’s United Palace, chosen to preserve the power of the theatrical storytelling Mays and Arden have created. Stay tuned for announcements of Theatre B productions in 2020-2021!