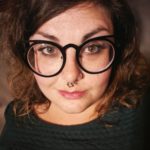 An Interview with Cate Ross: Bonnie in The Last Schwartz

It’s about putting square pegs in round holes and vice versa, the slow realization that maybe things come easier if you don’t force them, and maybe there is a place for everything after all. It’s about family and more importantly, about what a family isn’t. While this family’s traditions may be different from what we typically imagine holidays to be like in the Midwest, there is a universal quality to what this family goes through over the course of the play.

This is a challenging play that still has something for everyone, which is what makes it such a fantastic choice for B. It asks some really compelling questions about family, faith, and human connection, which we all have our own answers for. I can’t wait to hear what answers our audiences will give us.

Tell me about your character, Bonnie.

Bonnie is a woman with a lot of pain in her life: she’s dealt with a lot of loss, some circumstantial and some consciously chosen. All this loss has changed who she thought she was, even caused her to lose her sense of self. At her core, Bonnie feels cheated and empty and wants more than anything to fill that emptiness. She, like all of us in our way, wants to belong to something bigger than herself. She could be described as selfish, but ultimately I think Bonnie reconnects with something important she lost inside of herself and achieves some healing.

It’s such a funny, fast-paced show that it’s hard to choose… I suppose my favorite line is either Herb’s Oprah imitation while he claims the table, or where Kia says she “feels like [she’s] in junior high again” while she’s changing into her lingerie. It just makes me laugh and cringe every time.

I found Bonnie to be extremely different from myself yet deeply relatable. While I don’t know what it is to struggle with infertility, I do know what it is to want something so badly you sacrifice things you swore you never would for it. I’ve experienced a deep and painful culture clash. I know what it is to hold yourself back in order to appease and placate others, and I have also eventually found my own voice and backbone. This role has been very interesting, complex, and even cathartic for me. I can relate to Kia for some similar reasons.

I fondly recall the rehearsal in which we decided Simon is actually a Sith lord. I also remember having a great feeling after leaving our first table read as a cast: I walked out of the space thinking this was really going to be something special.

This is my first time on stage in about four years, and definitely the biggest role I have ever played. I last appeared on stage in Theatre B’s Wit and 12 Dates of Christmas; prior to appearing at B, I acted in several productions at Concordia College, most notably in The Madwoman of Chaillot for which I won a KCACTF nomination in 2009. There was virtually no drama department at my high school during my time there, so I was very into Speech where I regularly placed in the top six in my events.