Meet The Artist: Clare Lynch “The How and the Why”

By: Monika Browne-Ecker|Published on: Feb 16, 2022|Categories: Arts & Entertainment, Ensemble, Season 19, The How and the Why| 0 comments 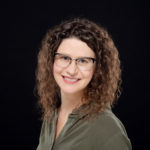 Recently we had a chance to watch a few rehearsals of The How and the Why by Sarah Treem. Below is a short interview with Clare Lynch who plays Rachel in the show.

The How and the Why is about two female scientists of different generations, both brilliant, both intensely stubborn, and both desperately in need of connection from the other and afraid to ask for it. The show’s themes include the generational divide between feminists, the struggles of balancing career and love, and what it means to be a woman from a core biological level.

Rachel is a 28-year-old graduate student in evolutionary biology who has just come up with a hypothesis about the evolutionary necessity of menstruation that she thinks will change her career—and the world. She just needs to get people to listen to it. She is just cocky enough that you know how insecure she is, and just guarded enough that you know how vulnerable she feels.

Telling intimate, vulnerable stories that ignite conversation among our audience is at the core of what Theatre B does. I have every hope that every patron will leave this play with something to talk about.

In many ways, especially early in the rehearsal process, I found it easier to relate to Zelda than to Rachel. Zelda is far more rational and level-headed. I found myself really excited to find hints in the script as to what Zelda has been doing for the last 30 years.

The first moment of the play is the first time these two characters meet face-to-face, so the first day we rehearsed with masks off was really special.

I come from a theatrical family and have been performing one way or another my whole life. I got my BFA in performance from NDSU in 2015 and have been an ensemble member at Theatre B since 2019.