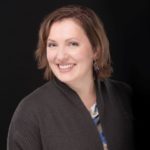 An Interview with Monika Browne-Ecker,

Properties Designer and Production Manager for The Roommate